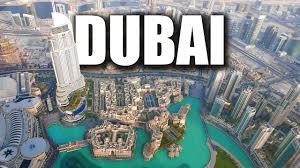 The first human settlement in the history of Dubai was in approximately 3000 BCE, when the area was inhabited by nomadic cattle herders. ... In 1966, oil was discovered in Dubai, which changed the country beyond recognition and led to Dubai becoming the vibrant, modern, business-centered city.

The move away from oil led to a boost in tourism, and the little oil Dubai eventually discovered in 1966 went towards building the city we know today. Dubai began shipping oil in 1969 and before gaining independence from Great Britain in 1971, when it became one of the UAE's seven emirates.

Dubai is famous for sightseeing attractions such as the Burj Khalifa (the world's tallest building) and shopping malls that come complete with mammoth aquariums and indoor ski slopes. But this city has many cultural highlights and things to do, as well as all the glamorous modern add-ons.

Women are expected to wear dresses or knee-length skirts or full length trousers, with t-shirt sleeves covering the upper arm of their body.

Public displays of affection are not well-tolerated in Dubai. Holding hands is fine for married couples, but kissing or hugging in public are not acceptable.


Average Rating: Not Yet Rated